A leadership contest could now take place after Nottinghamshire County Council leader Kay Cutts announced she would not be standing at the next election following her latest failed attempt to establish a unitary authority.

Mrs Cutts stunned Conservatives at a nominations' hustings for her Radcliffe seat on Saturday when, after delivering her pitch to be the ward candidate to fight the May 2021 election, she did a sudden u-turn and announced she was stepping down as leader at the next election and didn't want to stand for a seat she has occupied since May, 1989.

Mrs Cutts had been pushing for a move to unitary authority, which would have seen the county council and the seven district and borough councils all abolished in favour of one new authority.

Her plans, which had already failed once, were highly contentious with the leaders of the other councils, and the leader of Nottingham City Council, objecting to Mrs Cutts' proposal and the timing of it during the coronavirus pandemic.

She had hoped Nottinghamshire was to be included in the first tranche of areas invited to submit formal proposals for local government reorganisation but that was dashed at the weekend in a tweet from Luke Hall, the Minister of State for Regional Growth and Local Government, that revealed councils in Cumbria, North Yorkshire and Somerset had been invited to make submissions.

It is understood Mrs Cutts, leader since May, 2017, had already been made aware of the decision to exclude Nottinghamshire, which was based upon the level of opposition from the seven district and borough leaders, and resistance from within her own group.

"Like with any councillor, it comes to an end and she has chosen the right time for that to happen.

"I have been very clear to the leader that a local level I have grave concerns concerns over the proposal for single unitary authority ­— that I need to be shown the evidence that it is the right thing to do; that it is not just one person's opinion, and I absolutely don't believe the evidence is there.

"I believe in localism. I believe that people can come to me, shout at me, tell me off if they need to because I am their representative councillor here and their voice here in the district."

Mr Girling said district and borough councils should have had the opportunity to draw up their propositions.

"We are a good district council providing excellent services," he said of Newark and Sherwood District Council. "Our residents' survey shows satisfaction was rated really high.

"What we have done during covid I am proud of. Businesses got their (support grants) money in timely fashion and we were in the top ten of councils for making that happen.

"We are the only district in the country on the government watchlist to have gotten off of it without the need for further restrictions.

"I don't believe the time was right (due to the pandemic) to be pursuing this. It's covid we should be focusing on."

Asked if there had been a fallout between county and boroughs and districts, Mr Girling said: "Things could have been handled differently and some people were worried about that, but I think the government should also shoulder some of the blame for that.

"The districts were right to make their own case. There are no hard feelings. A case for reorganisation should have involved all options being on the table ­— not just one unitary authority, which was a predetermined position, and that's not right.

"Nottinghamshire County Council is a is a good council. It's not its fault it's in the financial position it's in. It has saved over £50m. Give it a breather government and get your hand in your pocket. Then the county doesn't need the assets of the districts.

"Nottinghamshire County Council is in a financial dilemma, but it shouldn't be going to the districts and taking their money. We (in Newark and Sherwood) have worked hard to make sure we have reserves. We were the only district in the county not to stop the two hours of free parking and to continue it until the end of September, knowing the the cost to us. We were able to do that because we have been prudent."

Mr Girling said he imagined there would be a leadership challenge if Mrs Cutts did not surrender the leadership before May because a new leader would want, and need, the opportunity to lead the party in the contest.

"I imagine there will be a leadership challenge," he said: "But realistically I think Mrs Cutts would step aside to give the opportunity to whoever takes over a year to demonstrate a safe pair of hands.

"We did that at district when David Lloyd became leader and I deputy so there was a year before the election and we were the only ones in the country to increase the Conservative vote.

"Whoever takes over needs time to put their stamp on things and show the public the council is in safe hands.

"I can't and I won't knock Kay for everything she has done, she has been that safe pair of hands." 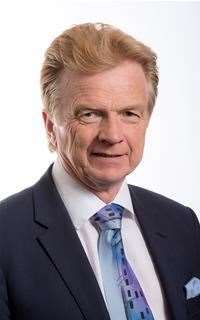